These titles were published in the second half of 2017, and are highly recommended if the topics are of interest to you. Scott Galloway is part of our NYU family – he’s a Professor of Marketing at NYU Stern School of Business. Eric Ries’s earlier book has been recommended by many entrepreneurs (who read), so his latest book was hotly anticipated. 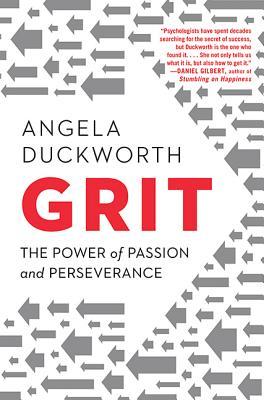 Grit : the power of passion and perseverance by Angela Duckworth

“Why do some people succeed and others fail? Sharing new insights from her landmark research on grit, Angela Duckworth explains why talent is hardly a guarantor of success. Rather, other factors can be even more crucial such as identifying our passions and following through on our commitments.

Drawing on her own powerful story as the daughter of a scientist who frequently bemoaned her lack of smarts, Duckworth describes her winding path through teaching, business consulting, and neuroscience, which led to the hypothesis that what really drives success is not genius, but a special blend of passion and long-term perseverance. As a professor at the University of Pennsylvania, Duckworth created her own character lab and set out to test her theory.

Here, she takes readers into the field to visit teachers working in some of the toughest schools, cadets struggling through their first days at West Point, and young finalists in the National Spelling Bee. She also mines fascinating insights from history and shows what can be gleaned from modern experiments in peak performance. Finally, she shares what she’s learned from interviewing dozens of high achievers; from JP Morgan CEO Jamie Dimon to the cartoon editor of The New Yorker to Seattle Seahawks Coach Pete Carroll.” – from Goodreads 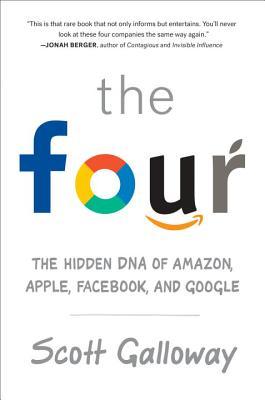 The four : the hidden DNA of Amazon, Apple, Facebook, and Google by Scott Galloway

For all that’s been written about the Four over the last two decades, no one has captured their power and staggering success as insightfully as Scott Galloway.

Instead of buying the myths these companies broadcast, Galloway asks fundamental questions. How did the Four infiltrate our lives so completely that they’re almost impossible to avoid (or boycott)? Why does the stock market forgive them for sins that would destroy other firms? And as they race to become the world’s first trillion-dollar company, can anyone challenge them?

In the same irreverent style that has made him one of the world’s most celebrated business professors, Galloway deconstructs the strategies of the Four that lurk beneath their shiny veneers. He shows how they manipulate the fundamental emotional needs that have driven us since our ancestors lived in caves, at a speed and scope others can’t match. And he reveals how you can apply the lessons of their ascent to your own business or career.” – from Goodreads 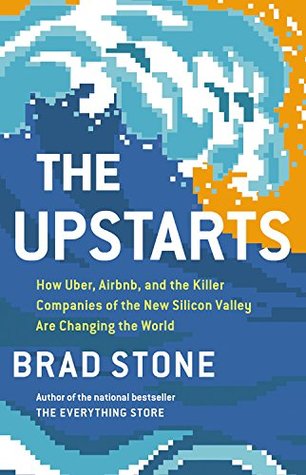 The upstarts : how Uber, Airbnb, and the killer companies of the new Silicon Valley are changing the world by Brad Stone

In the spirit of iconic Silicon Valley renegades like Steve Jobs and Bill Gates, a new generation of entrepreneurs is sparking yet another cultural upheaval through technology. They are among the Upstarts, idiosyncratic founders with limitless drive and an abundance of self-confidence. Young, hungry and brilliant, they are rewriting the traditional rules of business, changing our day-to-day lives and often sidestepping serious ethical and legal obstacles in the process.

The Upstarts is the definitive account of a dawning age of tenacity, creativity, conflict and wealth. In Brad Stone’s highly anticipated and riveting account of the most radical companies of the new Silicon Valley, we find out how it all started, and how the world is wildly different than it was ten years ago.” – from Goodreads 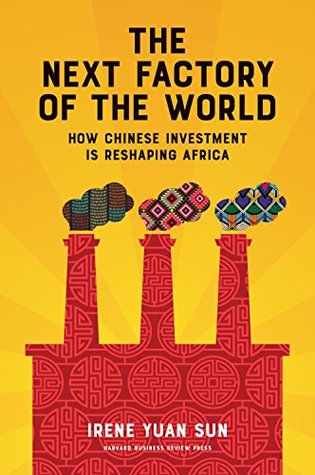 The next factory of the world : how Chinese investment is reshaping Africa by Irene Yuan Sun

“China is now the biggest foreign player in Africa, and its largest trade partner, the largest infrastructure financier, and the fastest-growing source of foreign direct investment. Chinese entrepreneurs are flooding into the continent, investing in long-term assets such as factories and heavy equipment.

Considering Africa’s difficult history of colonialism, one might suspect that China’s activity there is another instance of a foreign power exploiting resources. But as author Irene Yuan Sun vividly shows in this remarkable book, it is really a story about resilient Chinese entrepreneurs building in Africa what they so recently learned to build in China–a global manufacturing powerhouse.

The fact that China sees Africa not for its poverty but for its potential wealth is a striking departure from the attitude of the West, particularly that of the United States. Despite fifty years of Western aid programs, Africa still has more people living in extreme poverty than any other region in the world. Those who are serious about raising living standards across the continent know that another strategy is needed.

Chinese investment gives rise to a tantalizing possibility: that Africa can industrialize in the coming generation. With a manufacturing-led transformation, Africa would be following in the footsteps of the United States in the nineteenth century, Japan in the early twentieth, and the Asian Tigers in the late twentieth. Many may consider this an old-fashioned way to develop, but as Sun argues, it’s the only one that’s proven to raise living standards across entire societies in a lasting way. And with every new Chinese factory boss setting up machinery and hiring African workers–and managers–that possibility becomes more real for Africa.

With fascinating and moving human stories along with incisive business and economic analysis, The Next Factory of the World will make you rethink both China’s role in the world and Africa’s future in the globalized economy.” – from Goodreads 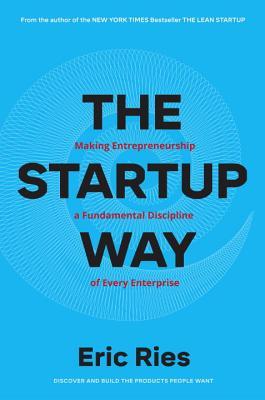 The startup way : how modern companies use entrepreneurial management to transform culture and drive long-term growth by Eric Ries

“Entrepreneur and bestselling author of The Lean Startup Eric Ries reveals how entrepreneurial principles can be used by businesses ranging from established companies to early-stage startups to grow revenues, drive innovation, and emerge as truly modern organizations poised to take advantage of the enormous opportunities of the 21st century.

In The Startup Way, he turns his attention to a whole new group of organizations: iconic multinationals like GE and Toyota, Silicon Valley tech titans like Amazon and Facebook, and the next generation of Silicon Valley upstarts like Airbnb and Twilio. Drawing on his experiences over the past five years working with these organizations, as well as nonprofits, NGOs, and governments, Ries lays out a new management system that leads to sustainable growth and long-term impact. Filled with in-the-field stories, insights, and tools, The Startup Way is an essential roadmap for any organization navigating the uncertain waters of the century ahead.” – from Goodreads